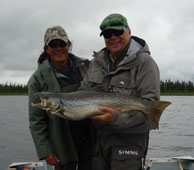 This member of the Atlantic salmon family with orange flesh, also called landlocked salmon, cohabits with speckled trout. For unknown reasons, perhaps the construction of many dams to create a large reservoir on one part of the Caniapiscau, since 1984 we have noted a large increase in the weight and number of catches throughout the season, from mid-July to early September. Please note that the catches vary between 4 and 19 lbs and frequently exceed 10 lbs; therefore, be equipped accordingly. Regardless of the date of your visit as soon as a fish is hooked he will leap acrobatically out of the water and fight until exhausted unless, of course, it escapes. 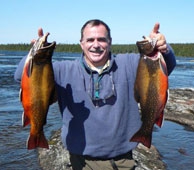 This species, which is also called red trout in Quebec, has a worldwide reputation as a fierce and tenacious fighter even when under two pounds (1 kg). Try to imagine a catch in the 3-10 lb range in the cold and turbulent waters of fast-flowing rapids. We recommend 7 lb test lines (or more) for inexperienced anglers since catches above that weight are frequently recorded at Club Chambeaux. However, average catches vary between 3 and 5 lbs. 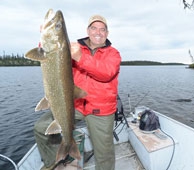 Gray trout, also call lake trout (Touladi). These monsters often exceed 30 lbs (15 kg) and catches over 15 lbs are common These are found all along the Caniapiscau and attack practically any lure. Those caught in rapids may surprise you; the cold water and their habit of swimming in strong currents give them exceptional strength and resistance. This is why we say ‘’BRAVO’’ to anglers who can bring in specimens over 20 lbs; in the empty the reel and wave goodbye. GOOD LUCK! 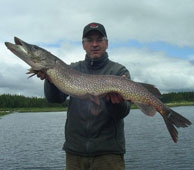 This pike’s aggressiveness is an ever present menace for all other species in these waters. The pike is often badly thought of, because of its unpleasant appearance and lack of fighting spirit. The Caniapiscau pike looks only a little different from those living in lakes, but this habitat of cold running water gives it vigour and resistance, which never fails to surprise an adversary who is not expecting to see a pike on the end of the line. This species can weigh over 20 lbs, and catches weighing more than 10 lbs are quite common. If you enjoy eating fish, you will appreciate sampling the filets, a shore lunch which your guide will prepare in expert fashion.